“Letters from the northern countries tell of snow, and winter winds begin to blow”

We have entered the mini season of First Winter.  This season runs from November 8 until November 22, and contains the micro-seasons of:

Established in 1685 by Japanese astronomer Shibuka Shunkai, the traditional Japanese calendar has 24 mini seasons and 72 micro-seasons.  Each season highlights a  slight change in the natural environment.  The micro-seasons are specific to the climate of Japan because they were developed around their agrarian society.  However, just because this calendar focuses on Japan doesn’t mean that it isn’t applicable to others.  The seasons can become a starting point for your personal exploration into the world around you.

The Camellia is an evergreen plant native to eastern and southern Asia with up to 300 different species.  The species Camellia sinensis is used to produce a variety of teas, whereas the Camellia oleifer is used to create edible tea oil.(2) The decorative flowering versions of this plant, including Camellia japonica and Camellia sasanqua, have become staples of winter gardens in Japan and southern United States. The flowers of the Camellia japonica can vary in color from white to red and may grow up to five inches in diameter. (3,4)

Symbolism of the Camellia

The Camellia flower, also known as the Tsubaki, has an interesting connection to Japanese culture. Depending on the source, the Camellia flower can mean a variety of things.  Alicia Joy explains that the Tsubaki “were very popular with nobles during the Edo Period. Among warriors and samurai, the red camellia symbolized a noble death. Otherwise, the red camellia means love. However, they don’t make good presents for people who are sick or injured because of the way the flowers “behead” themselves when they die.” (5)

Poet Masaoka Shiki (1867-1902) was born into a samurai family and also spent time in the Japanese Army. (6)  I wonder what role the symbolism of the Camellia played in the creation of this haiku.

Shiki is known for promoting the idea “shasei” in haiku.  Shasei has been translated to mean “sketch of life” or the idea of promoting realism within art and writing. The Shiki Project in Matsuyama expands on this definition by stating, “writing exactly what you see so the reader could also experience the scene and understand what had moved you.”(7) Does this mean that this haiku is simply an observation and nothing else?

Perhaps not. Charles Trumbull states in an article for the Haiku Foundation:

“It was not long after he began his haiku reform, however, that Shiki realized the limitations of a strict interpretation of shasei. While continuing to advocate the sketch from life for beginning haiku poets, he admitted the application of imagination and subjectivity to the composition of poetry. Not doing so, Shiki believed, could well lead to triteness in composition.” (7)

Taking this into account, does Shiki’s haiku relate back to the noble death of a samurai? Is there a connection between the fact that the flowers “behead” themselves and the flower on the street.  Or perhaps this haiku is a reflection of lost love?

We may never know the exact intention behind this haiku.  But that is what I find so enjoyable about haikus and poetry, is that these short lines can become gateways into a deeper exploration into ourselves and our connection to the world.

The Camellia and American Literature.

The camellia flower also has a prominent spot in American literature. Specifically, the Camellia becomes a supporting character in Harper Lee’s To Kill A Mockingbird.

To Kill A Mockingbird is “both a young girl’s (Jean Louise Finch aka “Scout”) coming-of-age story and a darker drama about the roots and consequences of racism and prejudice, probing how good and evil can coexist within a single community or individual.” (8)  The flower plays a pivotal role in the interactions between Jeremy Atticus, Scout’s brother, and Mrs. Henry Lafayette Dubose, an older woman who is known for her intolerance.  As the story unfolds, Jeremy and Mrs. Dubose learn about each other and their individual challenges.

At on point in the story, Jeremy cuts off all the Camellia flower heads in anger towards Mrs. Dubose.  After this happens, Mrs. Dubose tells him that in order to kill this plant you need to “pull it up by its roots”.  Although, Mrs. Dubose is specifically talking about the plant, the literary reference is pointing back to the struggle of racism and intolerance. “Racism and intolerance can not be solved with surface-level tactics like violence and rebellion. Instead, it is through compassion that one can achieve the understanding to really make a change.”(9) When Mrs. Dubose passes away, she leaves Jeremy a box with a white Camellia flower.  Perhaps this is Mrs. Dubose’s final message, and final acknowledgement, that with patience, compassion, and understanding, we can heal those deep wounds that plague our human relationships.

The Camellia flower is fairly unique become it blooms when many other flowers have gone dormant. This adaptation has enabled it to procure a special spot in both Japanese and American cultures. Whether in haiku, or in American literature, this flower calls us to stop and think about our connection to the world around us. Hopefully, it will also remind us to think about love, patience, and compassion for those that we share the planet.

Inspired to buy a book mentioned in this post? Consider using the NaturalistWeekly’s Bookshop.org storefront. We are an affiliate of Bookshop.org and may receive a small commission if you buy a book from Bookshop.org.

Support our work while shopping for your favorite books using  Bookshop.org 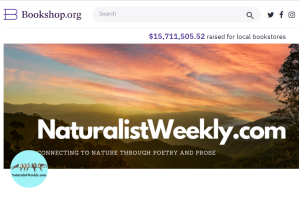 Biophilia is the human desire to be with nature. It is also the innate tendency to be drawn to other forms of life and an sense of needing to support and care for other living things.